Among the Innocent by Mary Alford Book Review 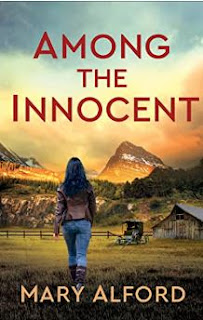 When Leah Miller's entire Amish family was murdered ten years ago, the person believed responsible took his own life. Since then, Leah left the Amish and joined the police force. Now, after another Amish woman is found murdered with the same MO, it becomes clear that the wrong man may have been blamed for her family's deaths.

As Leah and the new police chief, Dalton Cooper, work long hours struggling to fit the pieces together in order to catch the killer, they can't help but grow closer. When secrets from both of their pasts begin to surface, an unexpected connection between them is revealed. But this is only the beginning. Could it be that the former police chief framed an innocent man to keep the biggest secret of all buried? And what will it mean for Leah--and Dalton--when the full truth comes to light?

This story was full of action and suspense. I didn’t even know who the bad guy was until it was close to being revealed! This has been my favorite book this year.  The plot had a lot of twist and turns with a strong story line throughout the book.

The characters are likable. The main character Leah Miller is a strong character that is still compassionate despite her scars she carries. After her family was killed brutally in front of her. She was taken in by an English family. Leah is a police officer and assumed the man who brutally murdered her family 10 years was killed in the fire. Now innocent girls are being killed ten years after the murder of her family.  Notes are being left for Leah from the killer. Leah is determined to stop the serial killer. The new police Chief Dalton Cooper and Leah team up to apprehend the killer. He has his own reasons to catch the killer. All the characters are well developed.

It’s been awhile since I have read any Amish books. This was a unique story in this genre. It still showed the simple life of the Amish, family, and faith.

I just don’t see much I didn’t like about this book other than it keeping me up way to late reading. The ending made me think that there might be a book 2.

Disclosure: I received this complimentary product through Revell in exchange for my honest thoughts.