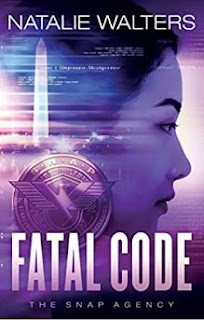 In 1964, a group of scientists called the Los Alamos Five came close to finishing a nuclear energy project for the United States government when they were abruptly disbanded. Now the granddaughter of one of those five scientists, aerospace engineer Elinor Mitchell, discovers that she has highly sensitive information on the project in her possession--and a target on her back.

SNAP agent and former Navy cryptologist Kekoa Young is tasked with monitoring Elinor. This is both convenient since she's his neighbor in Washington, DC, and decidedly inconvenient because . . . well, he kind of likes her. As Elinor follows the clues her grandfather left behind to a top-secret nuclear project, Kekoa has no choice but to step in. When Elinor learns he has been spying on her, she's crushed. But with danger closing in on all sides, she'll have to trust him to ensure her discoveries stay out of enemy hands. Natalie Walters sucks you into the global race for space domination in this perfectly paced second installment of her SNAP Agency romantic suspense series.

I was glad to get reacquainted with the team at The Snap Agency. I enjoyed the first book in the series, “Lights Out”. One character in particular was Kekoa and his fun antics and personality. I was delighted to learn more about his history.

Kekoa Young is a cryptologist and former Navy. He finds himself in a position of investigating his neighbor Elinor Mitchell who is an aerospace engineer who is heading off the work on Space Force. Someone is selling the company’s secrets and they hire the Snap Agency to investigate it. In all appearance Elinor looks guilty due to emails that are found in her company email box. Kekoa is assigned to get to know her; he quickly sees that she is not guilty despite the evidence and he was the one that found the emails. Things don’t add up and he doesn’t believe that she is the one selling the secrets. Elinor is a number geek and her character is played out well in this story with her personality. There is a lot of good chemistry between Kekoa and Elinor.

The book is a suspenseful page turner. I had a hard time putting the book down. This is a heartfelt Christian Romance with a lot of suspense. The faith parts felt genuine and not hollow. I enjoyed the book and look forward to the next book in this series. It looks like Garcia and Lyla will be the main focus!

Disclosure: I received this complimentary product through Revell in exchange for my honest thoughts.